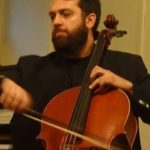 Miltiadis Cassaras took his first music lessons alongside his father. From his teenage has appeared in greek television, performed as a solist in recitals and live concerts in cities throughout Greece. He was chosen, after a competition to represent Greece to the Mediterranean Youth Orchestra. He was the first Greek cellist that was chosen receiving the highest grade, in the first 10 years of the competiotion. He represented Greece in the (ECUME), in the frame of “Thessaloniki Cultural Capital of Europe” series of events in 1997 performing as a soloist with the Orchestra of the State Conservatory of Thessaloniki.

He has given concerts in Germany, France, Italy, Albania, Kosovo, F.Y.R.o.M., Morocco, Tunisia and other countries.  He has participated and recorded for the Greek and German radio. He was student of universally acknowledged and famous professors such as: N. Gutmann, X. Jankovic, A. Baillie, G. Teulieres, C. Ilea, E.Papastavro, T. Wick and others.

Miltiades Cassaras masters a very wide repertoire that expend from the early baroque era to nowadays, covering all the length of cello repertoire.

In the Greek audience he has first performed works of Piatti, Cassado, Chatshaturjan,Britten,Ginastera,Servais, Rossini,Mainardi,Kodaly and many other composers. He collaborate with renowned musicians such B.Giraud,D.Hann,S.Badivuku,B.Fidetzis and many others.