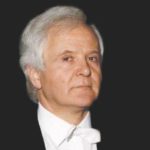 VINCENZO MARIOZZI He was the first solo clarinet for about 30 years in the Orchestra of the National Academy of Santa Cecilia since 1968, he studied with Gambacurta at the conservatory of Rome where he then taught for many years. Already first solo clarinet of the Teatro Massimo Orchestra in Palermo, he held the same role in the World Symphony Orchestra. In 1967 he was awarded at the international competition of Geneva. As a soloist he has given concerts under the direction of Markevich, Kurz, Previtali, Zecchi, Ceccato, Renzetti, Marriner, U. Benedetti Michelangeli, Maag, Sinopoli, Sawallisch, Giulini and Gatti. He also carries out an intense chamber music activity with tours in Spain, Belgium, Austria, France, Germany, the Soviet Union, Australia, North and South America. Very appreciated on the occasion of the Mozartian Bicentennial, his interpretation of the Concerto K. 622, also proposed at the prestigious Europa Mozart Praha festival. He has made many recordings for Rai and various recordings, the most recent are dedicated to sonatas for clarinet by Brahms and at the Mozart concert with the Mantua Chamber Orchestra in addition to clarinet quintets by Mozart and Brahms for the Hamphlion label. Very much appreciated teacher of his instrument, he holds courses and masterclasses in Italy and abroad. Founder and director artist of the Fiuggi International Festival, he made his debut as conductor in the main theaters of Caracas and Lima, enjoying great success with critics and audiences. He has directed, for the opera season of the Teatro Petruzzelli in Bari, Cosi fan tutti by Mozart, with considerable success and appreciation from specialized critics.