Sarah is a young Belgian soprano. Her recent success as the Teenager, in Jean-Luc Fafchamp’s Is this the end ?  at la Monnaie / De Munt in Brussels marked the beginning of her international career. Last season she made critically acclaimed debuts at the Staatsoper Unter den Linden in Berlin in a role written for her by Peter Eötvös (the Girl/Sleepless). She also debuted at the Grand Théâtre de Genève, the Nouvel Opéra Fribourg and Müpa Budapest. This season she will make her debuts as Zdenka (Arabella/Strauss) at the Teatro Real Madrid. She was elected « Young Musician of the Year » by the Belgian Press Union.

Her acting and piano training contributed to her personality and to her eclectic repertoire ranging from chamber music, to operas, recitals with orchestra or solo-voice shows, with a particular taste for XXth Century and contemporary music.

Sarah holds a Master in Music from the Koninklijk Conservatorium Brussel and a PhD in the Arts from the Vrije Universiteit Brussel. 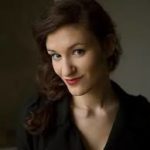